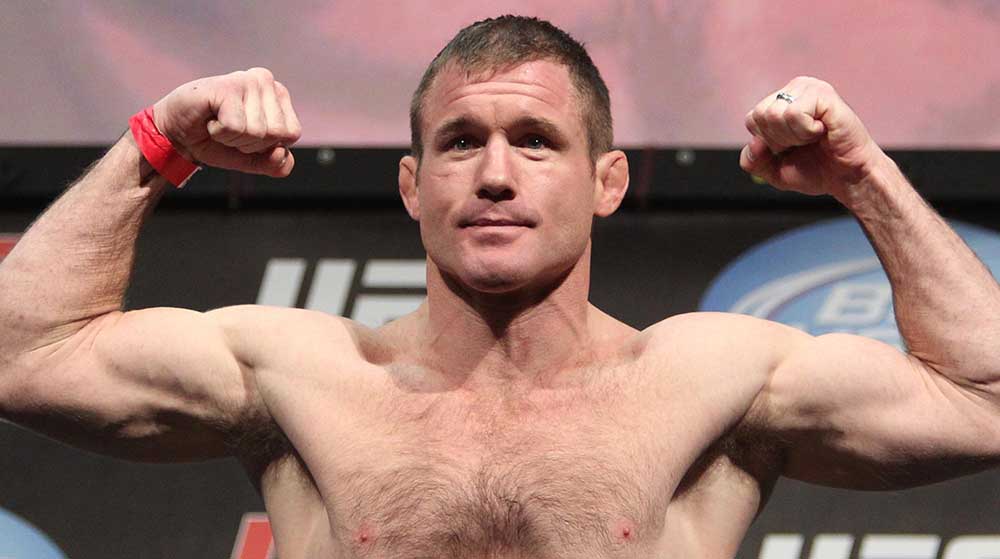 Matthew Allen Hughes is an American mixed martial artist who began his journey as a wrestler. Several years on, and there was a transition into MMA.

Matthew’s greatest achievements include being the UFC Welterweight Champion, a two-time ‘Fight of the Night’ honoree, and an inductee in the NJCAA Hall of Fame.

His winning streaks against formidable opponents like Georges St-Pierre, Royce Gracie, and Frank Trigg have carved his career path over the years. Read interesting facts about Matt Hughes in this review.

Who is Matt Hughes?

Matt Hughes is a 47-year-old fighter from Hillsboro, Illinois, USA. Interestingly, he has a twin brother called Mark.

The twins share the same fervent passion in sports. They played football and indulged themselves in wrestling. Matt excelled in the art as he was a two-time 145 lb Illinois High School Association Class A state wrestling champion.

He picked these titles in 1991 and 1992 while attending a high school in his hometown, Hillsboro. Remarkably, Matt’s winning streak began while he was playing for his school team. He remained undefeated in both his junior and senior years of high school.

By the time he was graduating from Hillsboro, Hughes had garnered 131 wins against 2 losses. The 2 losses occurred while he was in his sophomore year. It was, therefore, no surprise when Matt went on to pursue wrestling in college.

At Southwestern Illinois college Hughes managed to rank No.5 in the whole nation at 158 lb. Unfortunately, however, the college dropped its wrestling program, forcing Hughes to transfer to Lincoln College. While here, Matt continued striving for excellence.

He came in the third position across the globe, racking up a record of 33-3 for the Lynx. By the time he was graduating from college, Matt had impressed many people in the institutions’ community, so he got recruited at Eastern Illinois University.

The height of his time here includes being named NCAA Division I All-American. This placed him at the eighth position in the 158 lb category globally in 1996 and fifth position in 1997, respectively.

Moreover, Matt completed his contract with the university with a stunning record of 80-15.

This match would put Hughes on a global forefront as it would serve as the beginning of his MMA winning streaks through his signature move, the legendary slam. Matt flattened his opponent, Joe Gaytia, in just 15 seconds via KO.

UFC came calling a year later, and a professional debut soon after, on September 24th, 1999. Matt beat Valeri Ignatov via unanimous decision at the UFC 22: ‘There Can Be Only One Champion.’ This marked the beginning of his exceptional UFC career.

Matt competed for the UFC World Welterweight title at UFC 34: ‘High Voltage,’ where he won the match against the former title champion, Carlos Newton. Hughes’ slam is the best in MMA history to date.

Matt went on to defend his title, successively at varied UFC events. During this time, he managed to amass several awards such as ‘Tapout of the Night Submission Award.’

In 2010, Hughes was inducted into the UFC Hall Of Fame. This ceremony was well deserved as the brilliant MMA fighter had shown nothing but hard work and determination in his career over the years.

After retiring from in-ring action in 2013, Hughes was named the Vice President of Athlete Development and Government Relations. This position was the perfect crowning for an MMA king. He was, after all, the most dominant champion in UFC history.

Matt released an autobiography in 2008, which was ranked No. 12 on the New York Times bestseller list. The book, ‘Made in America: The Most Dominant Champion in UFC history,’ is co-written by Michael Malice.

Other than this, Matt has tried out other fields given his fighting background. For instance, Hughes is the host of a hunting program in Trophy Hunters TV since January 2011.

The program airs on the Outdoor Channel three times a week. Fans often compare it to the Texas Trophy Hunters Association. Additionally, Matt managed to secure his own show called ‘Uncaged with Matt Hughes’, which airs on Saturday on the Sportsman Channel.

Moreover, Hughes is the host of ‘The Takedown with Matt Hughes.’ The show airs on Sundays on the Sportsman Channel. It was a nominee for the ‘Best New Series’ award in 2015 at the Sportsman’s Choice Awards.

Furthermore, Matt was a board member for five years in the Triumph Over Tragedy Foundation. This foundation catered to the needs of victims who suffered from brain and spinal cord injuries. His own personal experience fueled his dedication to this establishment.

A train accident almost took Matt’s life. It put him in a medically induced coma for a while. He regards his recovery as a miracle. Hughes is a born-again Christian, as reflected on his frequent Bible verses posts.

There is no doubt that Matt is an MMA icon. His successful career that ran for over two decades is air-tight proof of that. Hughes is in the list of best fighters of all time.

His Net Worth and Sources of Income.

Matt Hughes carved out a lucrative career path for himself. Back in 2014, sources revealed that Matt had a net worth of $5.7 million.

Over the years, he has garnered wealth, and therefore his net worth has increased. Throughout his UFC career, Matt amassed a total of $9 million.

His net worth was $8 million last year. Presently, Matt Hughes’ net worth stands at $10 million.

His ex-wife Audra Moore-Hughes and their kids.

Matt Hughes’ ex-wife is Audra Moore. During their marriage, they had three children; two biological daughters of Hughes and one son, who Audra had during her previous marriage.

The two remained married for over two decades before Hughes filed for a divorce.

After she filed a restraining order against her husband, this required the MMA icon to remain 500 feet away from Audra and their children.

His ex-wife narrated two grim ordeals in court, which occurred between 2017 and 2018.

Photo of Matt Hughes with her ex-wife and children.

These allegations were cemented further when Mark, Matt’s twin brother, filed a restraining order against his brother.

He claimed that his brother had choked his son and attempted to wreck his tractor. However, sources claim that the bitterness between the two brothers did not last long. The two settled their differences amicably through their lawyers.